The joy of going off-grid.

So much of my day is now spent connected that to disconnect seemed, if not impossible, then at the very least a Herculean task. But that is the goal I set myself when we decided to go on a family vacation to Mexico.

“For two weeks,” I declared aloud to The Gent, “I will be off social media!”

To his credit, he did not scoff at my lofty statement of intent. In fact, he did not even raise an eyebrow. He just listened to me and nodded, and then agreed, wholeheartedly.

Our vacation would involve five tweens and teens, and he admitted he’d had premonitions of teen hands glued to their devices, with glassy-eyed stares, waiting Snapchat notifications. I shared my thoughts and The Gent’s concerns with the other adults on the trip, and the adults were in agreement: no WiFi. 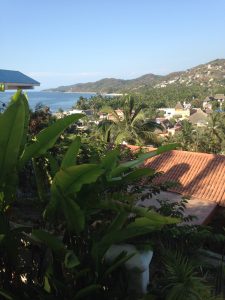 Who needs WiFi when this is the view?

But the best-laid plans, etc. The teens were quick to discover the hidden password and it was a losing proposition to enforce the agreement. I, however, was still determined to remain disconnected, at least from social media. Because I have to confess, I feel a little addicted to it. We all expressed concern about the teens obsessing over their texts and chats, but both The Gent and I gravitate towards our phones more than we’d like to admit. 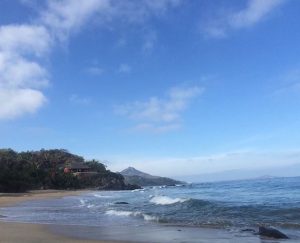 When I stopped trying to connect and just looked up.

As a writer, social media can play an important role. Twitter, Facebook, Instagram, Snapchat are all ways in which I can reach out to my readers and let them know about the projects I am working on and the books that are coming out that might interest them.

I tell myself that this, social media, is how I stay connected. However, the reality is by being “connected” I am also allowing myself to be disconnected, disconnected from the present moment, and the present conversation right in front of me, because often those are harder than the easy connection of a “like” or a double click for a heart.

So when I arrived in Mexico, I put away my phone. I briefly wondered if I’d have a physical withdrawal, nothing like Trainspotting, but maybe my hand would itch, or my thumb would inadvertently twitch in a scroll pattern. I was surprised to find that the moment I tucked my phone away, I felt at ease as if a responsibility had been lifted. It dawned on me that, as ridiculous as it might sound, I could be in that very moment and not share it with anyone. Of course, I’m sharing it now and that paradox doesn’t escape me. But at the time it was incredibly liberating. 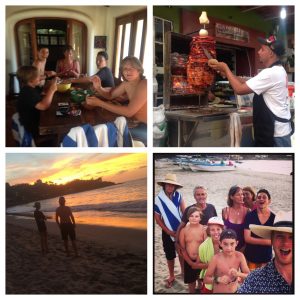 For two weeks I was in the present. Or mostly in the present. Okay, as present as I can be given my imagination and predilection for worrying. And this is the beauty that I experienced: Laughing at the table while making dinner. Seeing the artistry of a street-side taqueria. Watching the sun set. Being in a family.

I’m not saying that it was all easy. Being in the present moment was often incredibly hard for me. I cried more. I was frustrated more. I was sometimes spiteful and jealous. I was all these things and…I was grateful.

I wouldn’t trade one tear or curse (and there was a lot of cursing, very creative cursing) because for two weeks I got what it meant to be connected. Connected to the people in my life. Fully.

Of course, it sounds completely oxymoronic to say that I only connected once I disconnected. But that’s what happened when I put my phone away and started paying attention.