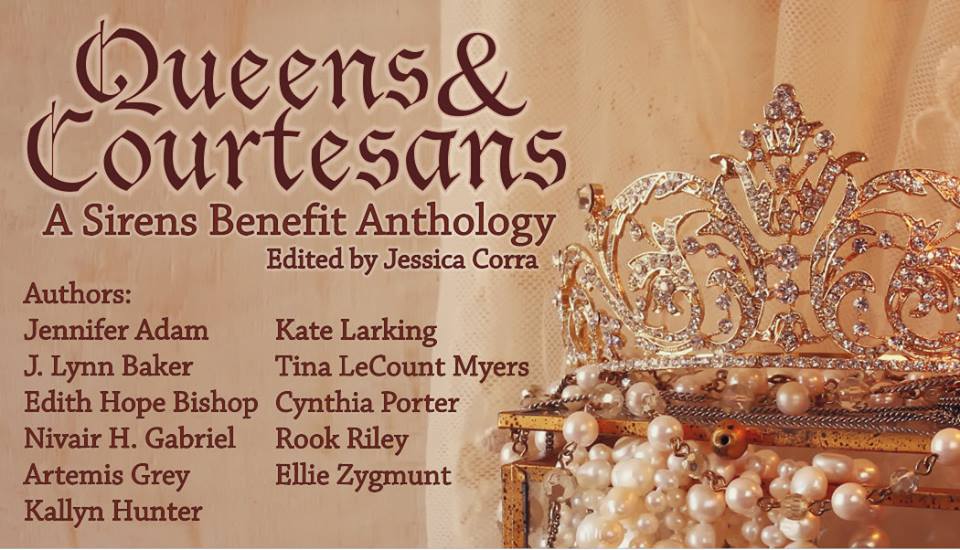 In March of this year, when Jennifer Baker proposed the idea of a short story anthology based on the archetypes of queens and courtesans, one that would explore their strengths, I knew I wanted to be in on it, as much to work with this dedicated group of writers that I’d met at the Sirens Conference  as to engage with these potentially powerful characters.

Because I’d been focused on writing long, epic fantasy novels, I hadn’t written a short story in more than three years. Initially, I think there was some delusion that because I could write 120,000 words I could EASILY write a story of 4,000-6,000 words.

What followed in the ensuing months was a rude awakening.

The talented Science Fiction and Fantasy writer, Paolo Bacigalupi has described writing short fiction as, “…more targeted–hand grenades of ideas, if you will. When they work, they hit, they explode, and you never forget them. Long fiction feels more like atmosphere: it’s a lot smokier and less defined.”

As it turns out, I am much more comfortable with smoke and atmosphere than I am with tossing a hand grenade.

At first, a way into the my short story was slow to surface. I began to doubt that I had anything to say about queens and courtesans, despite my background in history.  Suddenly, my commitment to the project looked rash and ill-advised. But one long car ride from Southern California to Northern California provided ample time to mull it over. For any of you who have journeyed the stretch of Interstate 5 between the Tejon Pass and Los Banos, you know that the uninspired countryside offers an opportunity to consider one’s own inner mental landscape.

When that spark of an idea hit, somewhere between Avenal and Coalinga, I felt the immediate upwelling of optimism and excitement that a visit from The Muse can elicit. I pulled over and made The Gent drive while I scribbled in the margins of every available scrap of paper. Praise be. I finally had a place to start.

In that first week of inspiration, I wrote the initial draft of the story. Then I realized with a sinking certainty that I needed to know the “whole story” behind my short story  to see where my 4,000-6,000 words would take me and ultimately the reader. This time, public transportation fortuitously provided an opening to engage in deep reflection. If you have ever taken the N-Judah line in San Francisco, then you know its consistent delays allow for almost zen-like contemplation. By the time I reached my destination, a monthly meeting with the First Writer’s Club, my writer’s support group, I not only had the whole outline of a novel, I also knew where my short story was headed.

But terminus and journey are two different things.

Over the next month, I wrote and rewrote my story five times, changed the title three times, and begged two of my trusted editors to tear it apart. (Thank you Jürgen. Thank you, Melina.)

In May, the comments of the anthology’s Beta Readers resulted in versions six and seven. (Thank you, Cynthia Porter.)

In July, the keen eye of anthology editor Jessica Corra transformed my story yet again, pushing me to consider changes that I was admittedly reluctant to make. But I made the changes and managed to find a common ground between writer and editor, one that incorporated the critique while maintaining the original vision.

Hard on the heels of version eight came version nine as proofreader Ellie Zygmunt brought to light all those errors that my own incurred eye overlooked.

August raced by in a series of production deadlines. Bios. Contracts. Cover art. Formatting. Proofs. The latter three are beyond my technical comprehension but have my wholehearted appreciation. (Thank you, Jennifer Shimada, Amanda Pommer-Lewis, Jennifer Baker, and Kate Larking).

Now in September with the release date of Queen & Courtesans: A Sirens Benefit Anthology nearly upon us, I am reminded of something Graham Greene once said. Greene noted that “With a novel, which takes perhaps years to write, the author is not the same man he was at the end of the book as he was at the beginning…”

I would say that it doesn’t necessarily take years or a man or a novel to transform the author. Any project, when brought to its completion, is a transformative process, one which, as a writer, I hope to engage with again and again, for as long as I can. 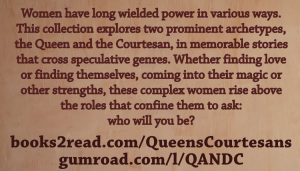 Queens & Courtesans: A Sirens Benefit Anthology is available for pre-order in digital format at:

Sorry, no pre-orders available for the print version.

Thank you to Amanda Pommer-Lewis for the promotional and branding images related to Q&C.