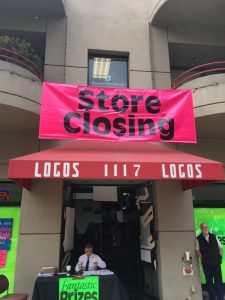 My heart could not be heavier with the news announced in the Santa Cruz Sentinel that Logos is closing. I arrived in Santa Cruz September 1990 as a freshly minted graduate student in history at UC Santa Cruz. I had visited Santa Cruz briefly the year before, just prior to the Loma Prieta earthquake of October 17th, 1989. What I remember from that first visit was a lush, tree-lined amble through the Pacific Garden Mall, with stops at various bookstores as the day’s warm glow faded into a mist of evening fog. That night we ate pizza at Pizza My Heart and gelato at Donatello’s. Less than a month later, the landscape of downtown Santa Cruz was shaken to its core, with recognizable and well-loved landmarks reduced to rubble.

When I arrived in the fall of 1990, it was to a transformed community where businesses bravely believed in a tomorrow and even perhaps a soon-to-be-renewed downtown. What ensued was the long road to rebuilding, with businesses ensconced in the tent equivalent of a Quonset hut. In these years of hope and slow resurrection, I perused the shop stalls of Bookshop Santa Cruz, Judi Wyant Antiques, and Paper Vision. I ate at the impromptu versions of Pizza My Heart, Asian Rose, and Zoccoli’s. I loved my new home town and I also honored what had been lost in the earthquake: a familiar downtown, locally owned and operated businesses, and a sense of grounded community. I spent the next several years frequenting these “temporary places of business” as I staked my claim in a town defined by long-time residents and passing-through students. As a graduate student, I was in for the long-haul.

And because I was a graduate student, I was in in love with books. This meant long hours searching the stacks in Bookshop Santa Cruz and Logos. I can remember when both these bookstores moved into their new spaces. The hours spent perusing increased in Logos with more albums, cassette tapes, and CDs. I still have some of each with the Logo’s stickers as a proud marker of time and place. Countless Saturday afternoons were lovingly doled out in the pursuit of that book or that album/CD. A marker of skills was being able to sort through the CD’s with both hands as one moved through the alphabet. And each time, a treasure rose to the surface. And each time, we all left enriched by both the challenge and the conquest.

Over the years, well past graduate school, we, those faithful,  have returned on Saturdays and then on special visits to introduce a new generation to the joys of finding a book, a CD, an album (yes, even in this time of eBooks and MP3 and downloads). There are few sweeter afternoons than those where a posse of kids finds something in the stacks to delight. And there are few more rewarding moments than finding a rich red or plush pink trade slips in one’s wallet to make magic happen.

I have definitely lived long enough to recognize that change must happen. But I have also lived long enough to mourn when it does. I will always have the recollection of warm light, shining through the back door of Logos, as I searched for a copy of Gabriela Garcia Marquez ‘s One Hundred Years of Solitude or Edgar Allen Poe’s Collected Works. But with infinite sadness, I must acknowledge that we will quote our Logos, Nevermore.