First Public Reading for THE SONG OF ALL 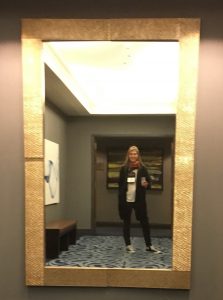 When I received the final programming schedule for this year’s World Fantasy Con, I was surprised and honored to discover I had a Reading slot. Friday, November 3rd. 2-2:30 pm. It would be my first public reading of THE SONG OF ALL.

And with that, I began to panic. 30 minutes? I couldn’t imagine reading for that long. I emailed my editor and my agent, and they calmed me down.

“You’ll make introductory remarks about you and the book, read for 15 minutes, or so, then take questions at the end.”

And then I began to obsess over what I should read, which meant I didn’t make any decision until just before the conference. Then I practiced aloud the selection to get the timing and inflections just right. Thursday, the first afternoon of the conference, I attended three readings to see how other authors handled their 30 minutes. And, as outlined by my editor, they followed opening comments with a 15-20 minute reading, and questions at the end.

By Friday, I’d practiced reading the selection another half-dozen times. My nervousness bounded between, What if nobody shows up? What if people do show up? Of the two, the former was the real fear. With ten minutes to go to my reading, I made my way to Executive Salon 3. The previous author had already finished, and the room was vacant. The neatly arranged conference chairs sat empty. I set my name placard up in front, poured myself a glass of water, and opened my bound manuscript to the selection I’d chosen. 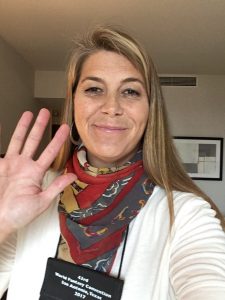 I texted my husband saying, “I don’t think anyone is showing up.” He texted back encouragement. I was about to pack up my manuscript and leave, the sting of humiliation flush on my cheeks, when someone walked in. I smiled and greeted her and resolved to do my best reading just for her. And then two University of Texas students walked in. They were fulfilling a class requirement. I welcomed them warmly, hoping my inner relief remained unremarkable.

With this quorum, I began my opening remarks, managing to keep going through a late arrival, even as I tallied silently. Four.

At five minutes after 2:00 pm, I began the reading. I found my rhythm almost immediately. My voice resonated just as I had practiced. The words rose effortlessly from the page. I tried to give them all the emotion I had put into them as I wrote and then rewrote this scene again and again in the pursuit of perfection.

Fourteen minutes later, I finished the chapter. I looked up at the neatly lined and mostly empty chairs before me. I was surprised to see my agent. Apparently, I had been so caught up in my reading, I had not heard him slip in to take a front-row seat. I silently tallied. Five.

The subsequent applause was generous, the questions perfunctory, and the comments complimentary. Still, the shame of 1:59 pm clung like a burr, determine to follow me out of the room as I packed up my manuscript and name placard, and placed my water glass on the tray in the corner. I walked beside my agent. He gallantly pointed out the challenges of the time and location of my reading. We emerged into the hotel corridor just as the neighboring room disgorged a packed house of enthusiastic attendees. With a flash of envy, I looked to the room’s marquee.

The organizers had scheduled me opposite David Mitchell!

I hadn’t realized this because I was so focused on my reading it didn’t occur to me to look who else was on the schedule at the same time. It felt like such a rookie mistake. But I was glad I hadn’t known.

Afterward, each time I found myself in the elevator with David Mitchell, I had a new surge of envy. But my jealousy would inevitably fade because David Mitchell was invariably gracious and charming, with that disarming accent. I thought of sharing with him this anecdote of my first reading pitted against his, but the elevator rides never afforded a private moment. And just as well.

It was my first reading. A starting point.  My next reading will likely not be scheduled opposite a Booker Prize nominee and New York Times bestseller with a lilting British accent. And besides, I had FIVE folks who chose me over David Mitchell.