Two sleepless nights in a row (I love my cats! No! I really do!) and I am a foggy-brained figure lumbering toward the tea kettle. Because I am focused on my cup of Tetley’s tea, my hand is a distant appendage and the phone I seem to be grasping is forgotten like any dream I might have had in the last two nights. 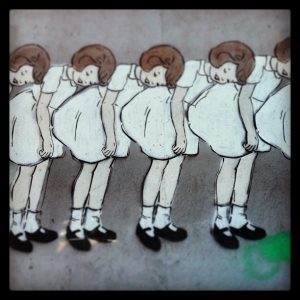 As I finally sip my tea, I feel the slow tick, tick, tick of the cogs in my head as they begin to turn. Only then do I recall the phone. Luckily, I’d managed to place it on the counter and not in the fridge as I pulled out the milk for the tea.

I push the on-button on the phone, and it comes to life, showing me that I have a new message. I check the number and see that it’s my agent.

I listen to the message.

“Tina, this is Mark. Call me as soon as you get this message.”

“Shoot. Shoot. Shoot,” I repeat, again with different vowels involved, as I fumble to get my earphones in (the effect of cell phones on the brain might be hooey, but I’ve got earphones so why not use them).

I hit call, feeling every one of those minutes that I was awake in the previous two nights.

What followed was a conversational haze. In part because of exhaustion and in larger part because of elation. Night Shade Books, an imprint of Skyhorse Publishing had made an offer of a contract for all three of my books–not just the first one, The Song of All, that they had in their hands, but the other two that were sight-unseen. (You can see a brief synopsis of each on the work page.)

A voice inside my head said, “You are going to be published!” And my heart started to beat faster. Becoming a published writer was what I had been working toward, it’s what all writers are working toward. It’s our dream, even if it is just in secret. 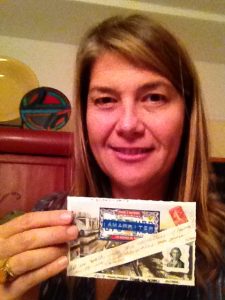 Sometimes I need to remind myself.

Then the part of my brain that is my “Responsibility Headquarters” kicked in and my heart palpitations started in earnest. I was going to be published. That part of my brain asked me if really I understood what it meant, and that’s when I went into survival mode.

Rather than dance around the kitchen in my PJs, which is what I wanted to do, my Responsibility HQ took control, and I found myself asking questions about the contract and delivery time and everything that that part of my brain thought was important because this was no longer a dream. THIS WAS A REALITY. 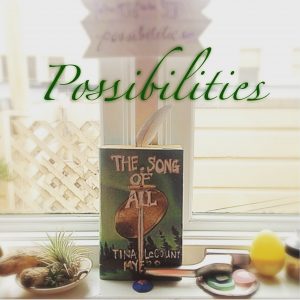 My Altar with my mock-up.

I quickly explained about the two nights of no sleep and the exhaustion, and he totally understood. I told him in all the words my brain could find that I was THRILLED! I mean come on?! I was going to be a published author. But I wished he could have seen my “Inner Big Dreamer,” the one that dared to try, the one that totally believed that this would happen. That part me was jumping around and yelling at the top of her lungs, “YES! YES! YES!”

Today, as I am looking at the official announcement in Publisher’s Marketplace, I am in awe of what has happened over the past four years since I said that I needed to finish the “novel.” The novel is done. I wrote two more in the series. I get to write each day within the amazing community of The Castro Writers’ Cooperative. I have the fabulous Mark Gottlieb as my agent. And now I have a publishing contract.

So thank you to all those friends and family and strangers who believed in me and encouraged me. And thank you to The Muse, for picking me to bring this story into the world beginning Fall 2017 with Night Shade Books.