Dreams of the Dark Sky Available for Pre-Order

It seems like The Song of All just came out?! Oh, wait! The Song of All did just come out on February 20th from Night Shade Books/Skyhorse Publishing. And Dreams of the Dark Sky, book two of The Legacy of the Heavens trilogy, is already available for pre-order in hardcover and paperback on Amazon. Since DOTDS is now officially out on Amazon, I thought I would share the back cover copy here. For those of you who haven’t read or haven’t finished reading The Song of All,  SPOILER ALERT. 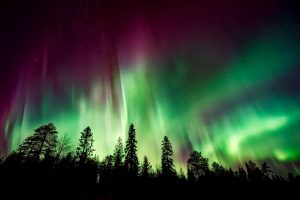 In the aftermath of a devastating clash between gods and men, two unlikely allies―one immortal and one human―must band together to survive in the sequel to the epic fantasy debut The Song of All.

The war between men and immortals that raged across the frozen Northland of Davvieana has ended. For men, the balance of power between Believer and Brethren, between honoring the gods and honoring the sword, has shifted to favor priests over Hunters.

But it is the legacy of one man’s love for his son that shapes the lives of all who survived.

While Irjan, the once-legendary immortal hunter, has saved his son’s life, he cannot save Marnej from the men who will make him a killer, nor can he save the immortal girl he’d promised to protect from the secret of her birth.

Raised by Irjan among the immortals, Dárja has been trained to fight by a man who once hunted her kind. Prisoner among the humans, her hatred for them is challenged by the chance to give Irjan what he has always wanted―his son Marnej returned to him.

Together, Marnej and Dárja, human and immortal, must find a way to trust one another if they are to live long enough to learn the truth behind the secrets and lies that have forged their lives.

The Song of All Hits the Road 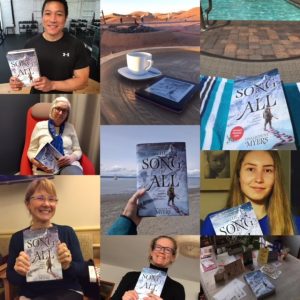 While I have been at home feverishly trying to finish up the second book this month, The Song of All has been traveling to quite a few places. Besides hitting the gym here in San Francisco, where it qualified for heavy lifting, The Song of All has visited Oregon, Washington, Nevada, Scotland, Germany, Finland, Morrocco, Japan, Mexico, and Australia. If you are on an adventure with my tome, tag me in a picture so I know how far this tale has traveled.